Sammie definitely let us know what she liked and when. 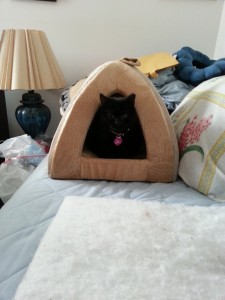 The vet had noticed that Sammie looked different than other cats.  She thought she was a Burmese.  Yet, I did not see in my research that the Burmese cat was black.    I found the Bombay cat was the only black cat breed, had the same copper colored eyes, had the same fur that was soft and compacted down and did not fly around like other cats.  We looked at other cats also.

When I asked the vet if they could do a DNA test, they said there wasn’t DNA tests for cats.   With all the DNA stuff going around today, I am baffled.  I have asked others and they have said yes she is.  Some people say all Black cats are Bombay cats, but they are not.  I see them in the shelters.  They have different colored eyes and do not have the smaller pushed in nose and face.  Bombay’s also have round copper eyes and Sammie has that.   Unfortunately for the nose, Sammie has a bit of a respiratory issue.   She has the classic gingivitis and respiratory issues.  Results of breeding!

We were getting more educated watching Jackson Galaxy’s show and others. I bought a bunch of books to read as well.    Sammie did not like any toys, but she started playing with small mice and a kicker toy by Spot. It had a tail and little eyes and came in pink, green and turquoise.  I also left a banana and some catnip toys around hoping to stimulate some activity.   She went from her original 6 pounds, to 9 pounds to 10.4 pounds.  She is a small female cat so the vet said so we need her to be more active.

We think she may have been hit during her time outside or before.  She does not like fast moving toys, or toys with sticks etc. 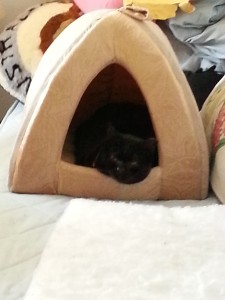 The good news, she began to play with the mice, so I left them on the floor all over the places she went.

I got a new teepee bed that had a floor with a pillow or mattress on the bottom of it.  She showed up in it one day.  I put it on top of the guest bed.  I guess no more guest bed, ha!

Now she has a new place for her to go.   She was having more confidence and feeling comfortable.  That made me so happy.   The allergy shots I am taking are working and I feel much better.   They told me no more cats and don’t let the cat sleep with you.   So far, so good!

We kept the basement door closed.  I wanted her to relate to us and was afraid she would hide down there and stay out of sight.  She also stopped going behind the couch and I took the little house she no longer used and donated to a shelter. 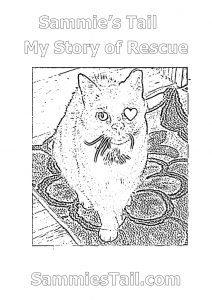